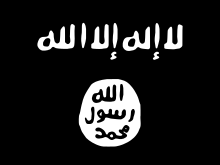 Q. I am a Non-Muslim and I would like to ask as to why I have seen many Muslims display the same seal as ISIS on their websites and blogs? Isn’t this association with a bloodthirsty monstrous cult?

Your question is appreciated and you are more than welcome to send any similar queries our way. It is pleasing to see that you have taken the time to ask instead of just noticing a symbol and making up your mind.

Let us begin by stating that our stance on Daesh (or so called “Islamic State”) has been abundantly clear long before the Media got on the ISIS bandwagon and we had not only denounced this monstrosity called Daesh from day one but took a principled stance that it has nothing to do with Islam.

Having set the set record straight on Daesh, lets proceed and talk about the associated symbols and flags.

A person enters Islam by reciting a proclamation commonly known as Shahadah (testimony) in Arabic, it’s as follows:

Translation: There is no god but Allah, [and] Muhammad (Peace be Upon Him) is the messenger of Allah.

There is no specific command or even recommendation in Islam to use it as a seal or inscribe it upon a flag or on a coin, nevertheless we find that throughout history and even today it is used for this purpose, the current flag of Saudi Arabia has this proclamation upon it.

King Offia of Mercia, England had also minted a coin which had the (Islamic) procalmation on it, as seen below.

Our point is that using the Islamic proclamation on a flag or coin long predates our contemporary discussions on symbols and their associations.

One important fact about Prophet Muhammad (Peace be upon Him) was that he was orphan and unlettered i.e. he couldn’t read or write. Therefore, when it came to signing treaties, writing letters to invite others towards Islam, he had to resort to two practical solutions:

1 He had to dictate to others (to write) since he couldn’t write himself.

Historical records indicate that he had a special silver ring made which he kept in his pocket and used as stamp when he went to attest it, a historical representation of his seal is shown below. You may notice that this ring has the last part of the Islamic proclamation in reverse, i.e:

2 The ring reads the reverse i.e. "Allah, Prophet and then Muhammad"

Some of his historical letters are still preserved in Museums and the (ring) seal can be seen at the bottom such as on this letter to a Monk. He signed a number of treaties and sent a number of letters in his lifetime, and some of them can be seen here.

Similar to the proclamation is no specific command or even recommendation in Islam to use it as a seal or inscribe it upon a flag or on a coin, nevertheless historically we have found Sufi Muslims have used similar rings and symbols to signify their endearment and closeness to the Prophet. In Islamic Sufi tradition some of these rings are passed over generations from one Sufi Master to another.

Daesh (or so called “Islamic State”) have randomly decided to create a flag with:

1 The first part of Islamic Proclamation i,e. There is no god but Allah, skipped the second half

We are unable to explain the reasons for this madness!

There is a long history of symbols being usurped and misused and the easiest you can relate to is the cross which is a symbol of Christianity. However, there are cult and occults around the world who have usurped and used it for their own nefarious and dark purpose. Therefore, should Christians disassociate themselves from the cross just because someone has adopted the cross and used it for their sinister purposes?

Lastly, a simple google search will produce many articles on the subject where Muslims have denounced Daesh using the Prophetic Seal. On Social Media you can search #NotYourSeal